Justinian’s Blog – The Road to Wolong 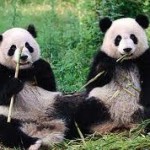 Since China is so vast there is no one statement or experience to cover the different levels of poverty in this country.  I currently live in Beijing and although there are still many people struggling with poverty within the 5th ring road, it is much more difficult to understand what actual poverty looks like when you are surrounded by the hustle and bustle of a city of over 20 million people.

During the first few weeks of July, I had the opportunity to travel to Chengdu and Wolong in Sichuan province, and to witness the devastation of the 2008 earthquake first hand.  The road to Wolong was almost completely destroyed in the quake and the aftershocks have continued to destabilize the landscape to the point that landslips and slides are a regular occurrence.

You would think that losing your home and, for many, your livelihood, would create a callous view on life and work.  In Wolong, most of the people that we met were of the Tibetan minority and unlike the more urban Han majority to the east, almost the entire village was based on small-scale un-industrialized agriculture.  The farmers in the mountains that we visited grew cabbage for their income and after talking with one of the local laborers we learned that the farmers we had met were making 0.1 RMB per pound of cabbage, or roughly making 1 dollar for every 18 cabbages sold.  To buy a movie ticket in the US they would have had to sell 216 cabbages. Although they were living in what we in the States would call ‘abject poverty’ they were some of the most welcoming and friendly people I have ever met.

Every time we passed their creaking wooden houses on our way up to film in the grasslands above, they would run out of their houses or fields and offer us lunch or a drink.  They had almost nothing, but were more than happy to share everything that they had with someone they hardly knew.  This sort of unconditional hospitality is not often found in the big cities I have visited and I began to wonder, once again, about whether our urban lifestyle with iphones, wifi, and fast food was really the way to be fulfilled as a human being.

These incredible people had little but loved lots. On this trip I learned what it truly means to give unconditionally.  I never had the chance to do more than sit for some honey and a chat, and although my Mandarin is pretty basic, I could still tell one thing.  These farmers knew what real happiness is and that it doesn’t come from buying more things.