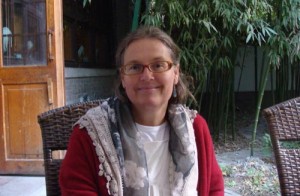 Kosima Weber Liu has been an Executive Board Member and Associate Director since the founding of the EEMP. A native German she has been residing with her family in Beijing for over 30 years.

Kosima studied at Bonn University and the China Languages and Cultural University and then pursued her graduate studies at the Central Academy of Fine Arts in Beijing and Indiana University in Bloomington. With her major in Sinology she also studied European Social and Economic History, Comparative Religion, Tibetan Studies and Chinese Art History.

Coming to China first in 1979 as an exchange student, she then achieved a two-year DAAD scholarship the next year to further pursue her China Studies in Beijing. She has worked as an arts buyer, professional photographer and since 1995 as director of Image at Work, a graphic design company. She developed a passion to capture the essence of China in her photographs, documenting old temples and Beijing’s ancient trees. Her photographic work has been exhibited in such exclusive venues as the Beijing Liao Jin City Wall Museum, the Forbidden City Ancestral (East) Hall, the Confucius Temple and in 2009 the Summer Palace. Kosima has worked on various video productions in China, India, USA, Europe, Mongolia, Korea (DPRK and ROK), South America and Africa.

Kosima has been running the EEMP DPRKorean project since 2001 focusing on raising awareness for sustainable development and nature conservation as key development factors. Since 2003 the EEMP has been cooperating with PIINTEC, a DPRKorean NGO on topics like renewable energy and organic farming and was successful in building an Environmental Information Media Center in Pyongyang (EIM Center).

The center mainly employes environmental experts and functions as intermediate media library of national and foreign materials to various institutions and organization. It holds workshops and film screenings, translates and versions films for broadcast and produces a newsletter to governmental and academic institution. 2010 saw the holding of the third International Workshop on Environment in Pyongyang and two Practical and Theoretical Trainings in Biodynamic Organic Farming as well as the beginning of a modest eco-community project. In March 2012 the EEMP organised a highly impactful ‘Forest and Landscape Restoration Seminar’ in Pyongyang (with 15 international and 85 Korean experts and joint published papers) and in the summers of 2011 and 2013 the ‘Mt. Paketu Joint Research Project on Geosciences and Ecology’. In July 2013 two experts from PIINTEC visited various German nature reserves, education centers and organic farms with the Michael Succow Foundation in Germany. The true highlights of the DPRKorean project are the two visits by Dr. Jane Goodall in 2004 and 2006.

Kosima has been promoting the concept of Environmental Security as the basis for a higher understanding of security at global scale. In the hierarchy of security ‘Ecological Security’ is indisputably the highest goal for all of humanity.