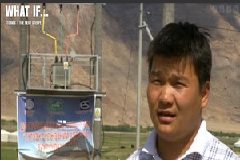 From the Mongolian steppes the horsemen of Genghis Khan rode out to carve a great empire that stretched from the grasslands of Central Europe to the Pacific. Only in Eastern Mongolia does the steppeland survive intact. Covering an area almost the size of Japan, horses and a spectacular array of wildlife far outnumber the semi-nomadic human population. Beneath the steppe are valuable oil and gold reserves, which are the focus of attention of foreign companies. Via the UN, the Global Environment Facility is supporting an ambitious conservation effort. John D. Liu traveled the steppe to assess the chances for safeguarding the grassland ecosystem and a way of life the warriors of the great Khans.